The Ararat Wind farm is located on rural land located approximately 180km northwest of Melbourne and between 9km – 17km northeast of Ararat in Victoria.

Key facts and figures about the wind farm are captured in the following info graphic. 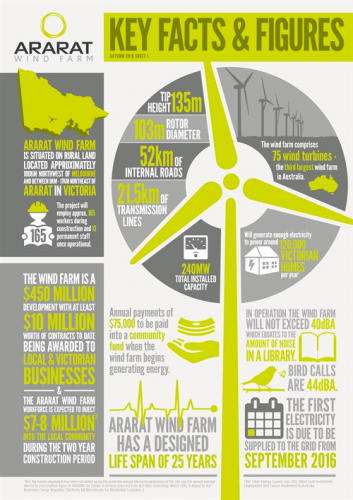 The wind farm delivers significant environmental, social and economic benefits to the regional economies of Ararat Rural City Council and Northern Grampians Shire Council area and to the Pyrenees Shire Council which is hosting the substation.

The hills around Ararat were identified as a suitable location for a wind farm in 2007 by project developer RES. The layout of the wind farm has been designed to take into account all we have learnt from carrying out extensive environmental studies on the site and by listening to the issues raised by the local community and consultees in response to our application.

The project was submitted to the Minister for Planning in January 2010 and was approved in October 2010. Further planning applications for the grid route and substation to connect the wind farm to the main transmission network were approved in 2012. The location and layout of the Ararat Wind Farm is shown below: 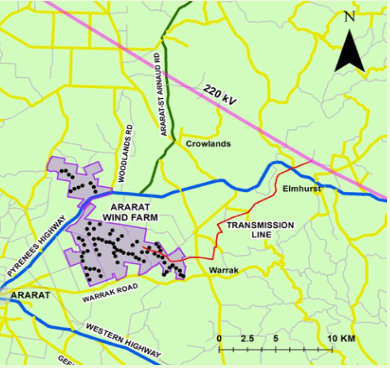 How a Turbine Works

In January 2015 Ararat Wind Farm Pty Ltd signed a Deed of Entitlement Agreement with the ACT Government, under the Electricity Feed in (Large –Scale Renewable Energy Generation) Act 2011. This Agreement represents a power purchase agreement with the Australian Capital Territory Government (ACT), guaranteeing the purchase of approximately 40 per cent of the energy produced at the site. This was awarded as a part of the ACT Wind Auction and the Government’s plans to source 90 per cent of its electricity needs from renewables by 2020. The award has provided significant long term investor security for Ararat Wind Farm and enabled construction to commence in late 2015.

The ACT Government is taking a lead role in encouraging the use of renewable energy, making the ACT one of the top places in Australia for renewables research, development and investment. The award of the FIT clearly proves Ararat Wind Farm to be an excellent and highly competitive project and will provide the ACT with long term value for money renewable electricity. The ACT FIT provides the cornerstone required to give long term certainty to investors and allow us to progress the project

The ACT Government has developed a Renewable Energy Local Investment Framework as a part of its vision of becoming an internationally recognised centre for renewable energy innovation and investment. Ararat Wind Farm is committed to contributing to the investment priorities of this framework. See more details here

In September 2017, Ararat Wind Farm and Flow Power, a business energy management and retail company, entered into an offtake agreement for 70MW of the energy produced at the site. The offtake agreement with Flow Power underpinned the launch of its Virtual Generation Agreement to Australian businesses and was one of the first agreements of its kind to be launched by an energy retailer in Australia.

Since 2017, a number of Victorian businesses, including ANCA CNC Machines, Burra Foods and Olam Orchards have entered into agreements with Flow Power to source a portion of their energy from Ararat Wind Farm.

The agreement between Flow Power and Ararat Wind Farm allows more Victorian businesses to access renewable generation. It is a key part of Flow Power’s mission to place its customers at the centre of the energy market to accelerate Australia’s progression toward a net-zero carbon future.